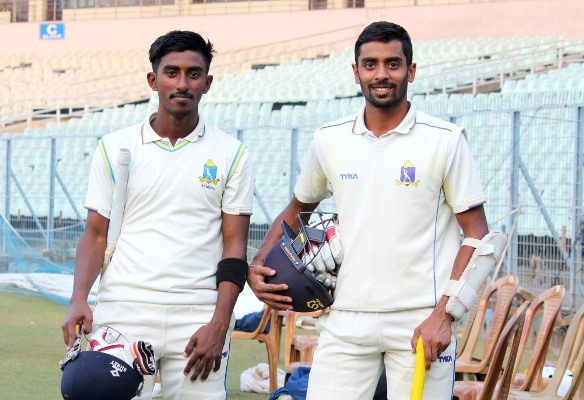 
17th January 2019
Abhimanyu Easwaran continued his fairytale run by completing hat-trick of centuries and was aided by a well crafted 131 not out by Sudip Kumar Gharami to power Bengal to 303/1 at the stumps on the first day of Col C K Nayudu quarterfinal encounter against Himachal Pradesh at Eden Gardens today.
The duo batted for over 68 overs on the first day to keep HP bowlers at bay and denied their every attempt to get back into the game.
Easwaran said after the match: "Our openers faced the new ball, when I came to bat the wicket became easy. I took my time at first and knew if we (me and Gharami) can bat till the end we will score big runs. Gharami played really well."
Easwaran who scored two unbeaten double tons in his last two Ranji Trophy matches for Bengal was at his brutal best today also as he stitched a 249-run second wicket partnership with Gharami to put Bengal ahead in the game.
Put to bat first the only Bengal wicket fell in the twentieth over as Ankur Paul was caught by P Khanduri off N Sharma on 34 but after that it was a frustrating day for Himachal Pradesh at Eden Gardens.
Gharami who batted the whole day showed real composure and patience during his 281-ball 131 not out innings while Easwaran played in his usual fluent manner to stay unbeaten on 122 off 189 deliveries at the end of the day's play.
Bengal's style of handling opponent bowlers clearly showed how well the duo read the pitch and pressed down the accelerator at the right time as the hosts reached the 100-run mark in 34.1 overs while the next two hundreds came in 138 and 173 balls respectively.
After lunch Easwaran accelerated the run rate hitting back to back boundaries off A Walia who later went on to leak total 51 runs in 10 overs.
Easwaran completed his century by hitting a swift six over long on off 144 balls while Gharami took 213 balls to reach his personal hundred-run mark with a boundary.