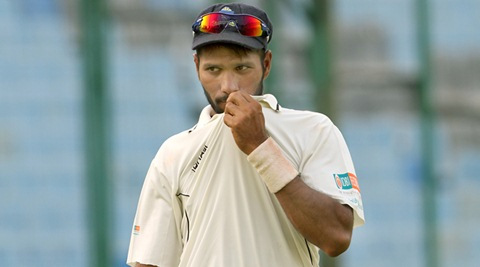 
7th October 2017
An unbeaten 77 run unbeaten partnership between Md Shami and Ashok Dinda for the last wicket helped Bengal pile up 552 for 9 declared against Services on the second day, even as the hosts finished were 103 for 1 at stumps.
Commencing on 341 for 3, Bengal lost Sudip Chatterjee early, but Wriddhiman Saha’s 55 and Amir Gani’s 51 meant Bengal went along merrily on a wicket that was becoming increasing slow and flat. But the monotony of steady batting got a rush of adrenaline as the pacer duo got together. With a target of finishing the innings early and yet achieving the target set by the team management Ashok Dinda tore into the Services attack pillaging 8 boundaries and two sixes enroute his unbeaten 25 ball 55 runs. He was ably supported by Mohammed Shami who remained unbeaten on 23 off just 22 balls.
“I enjoyed the batting. I decided to hit out as we wanted to reach the target of 55 early. It was fun to be able to hit the ball so well,” said Ashok.
Bengal began the defense of the target in bright fashion as Md Shami trapped Nakul Verma lbw with one that came in late, but after that the Services batters just dropped anchor. The fact that the wicket was getting easier with each passing minute did not help the bowlers as Manoj tried both pace and spin to get a few more wickets.
“It was not easy. The wicket is playing really easy. But that is not an excuse. Tomorrow hopefully there will be some life in the morning that we have to utilise and then wait for reverse swing as the ball gets older. If that doesn’t happen the game just gets tougher for us,” a concerned Manoj Tiwari said.
But with the batters doing good in their department, Skipper Tiwari can only keep his fingers crossed that the senior pros of Dinda and Shami will do the job at hand and will be ably supported by Kanishk Seth and B Amit.