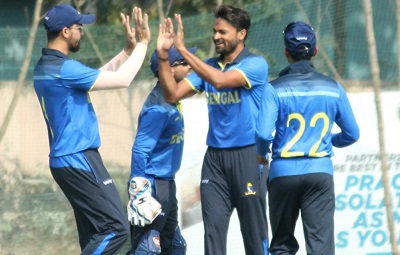 
10th January 2021
A fine half century from Vivek Singh ensured Bengal register a facile nine wicket victory over Odisha in their first Group B tie of Syed Mushtaq Ali Trophy at the JU Salt Lake campus today.
Chasing 114 to win after Oshisa was bowled out for 113 in their 20 overs, Bengal reached the target in 12.2 overs losing one wicket, with Vivek Singh and debutant Suvankar Bal remaining unbeaten on 54 and 34 respectively.
Vivek showed prime form as he played freely all round the wicket scoring 54 off just 35 balls. Suvankar Bal, who made his debut today, also showed a lot of maturity remaining not out on a stroke filled 34 off just 23 deliveries.
The only wicket that Bengal lost was of Shreevats Goswami, playing his 100th T20 match. He got off to a fine start but was out mistiming a drive on 25. He just took 16 balls hitting 5 boundaries.
Meanwhile, Vivek dressed his innings with six boundaries and two sixes, while Suvankar hit four boundaries and one six in his essay. Suvankar also showed his excellence in the field as he run out Odisha opener Shantanu Mishra for six.
After the match skipper Anustup Majumdar said: "All credit to the bowlers for restricting Odisha to 113 on this wicket. The batters also batted brilliantly. The format of the tournament is such that we just can't put our feet of the pedal. Run rates and averages will also matter and the instruction to the boys was to get the runs as quickly as possible and they did not disappoint."
Earlier, Bengal won the toss and elected to bowl. Odisha never got off to a start losing wickets at regular intervals.
The pace trio of Ishan Porel ( 4/26) Akash Deep (2/20) and Mukesh Kumar (2/26) ran through the Odisha batting.
Rajesh Dhupar (37) and Ankit Yadav (32) raised hopes of an unlikely fightback but the 65 run partnership for the sixth wicket was brought to a close by Akash Deep who removed Dhuper caught at midwicket by Vivek Singh.
Kaif Ahmed also debuted for Bengal in this match.