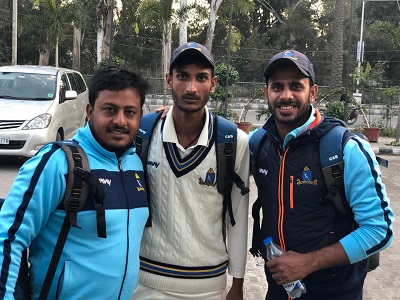 
13th February 2020
Bengal rode on Shahbaz Ahamad's superb bowling and Manoj Tiwary, Arnab Nandi half-centuries to end the second day in a commanding position with a 186-run lead against Punjab in a Ranji Trophy Group A match in Patiala today.
Shahbaz continued his superb form this season in this match too and bagged 7 wickets leaking just 57 runs to bowl out the hosts for 151 runs from 93/3.
The seven-wicket taker said to CAB media: "There was some help from the wicket, ball was turning and I capitalized on that. Mandeep Singh's wicket was very crucial for us as he was a set experienced batsman for Punjab. I bowled him while he was trying to play it on backfoot. It was the best wicket for me in today."
"It's a difficult wicket to bat on but I would've been happier if I could've contributed more with the bat. We'll utilize whatever help we get from the wicket tomorrow and defend the total," he added.
After that Bengal batted for 66 overs and scored 199/9 to put the visitors in the driving seat while Kishan Alang bagged 5 fpr the hosts.
Earlier Akash Deep drew the first blood on the second ball of the day to state Bengal's intension clearly and after that Shabaz removed set batsman Mandeep Singh (29) to open the floodgates.
The hosts lost 7 wickets for a paltry 58 runs after that collapse. Akash bagged 3 wickets for Bengal.
Bengal coach Arun Lal said: "Terrific fightback by Bengal. At one stage they were 93/3 and from there we bundled them for 151. We played very well. The wicket is not easy but the way Manoj and Arnab played is commendable. I would have been happier if we would've scored 199 losing 3 lesser wickets."
"Shahbaz was fantastic with the ball today. What a performer he is. He's got so much to offer with both bat, the ball and fielding also. He's got the will to do good for the team, he's fit also but when under performs I get angry with him," he said while praising the Bengal all-rounder.
Put to bat again Bengal got off to a shaky start losing 3 top order batters for 21 runs till Manoj and Arnab restricted the slide with a 107-run partnership.
Manoj smashed a fine 65 off 119 balls while Arnab scored 98-ball 51 to lift Bengal to a dominating position.
Arun also said: "This team has spinners who are front line batters. Arnab and Shahbaz are two assets of the team. Today we have sent Arnab at four and he played very well there. I would be very happy if we can add more 20 runs tomorrow. I am very happy with today's performance and now we are in a position to fight and win this game. I believe at the moment the game's hanging slightly in our favour. What a performer Manoj is also, he played very well in both the innings. He's very determined. This is a very good side."
Sreevats Goswami and Anustup Majumder added crucial 24 and 26 runs respectively.